Writing the wrongs of our forefathers 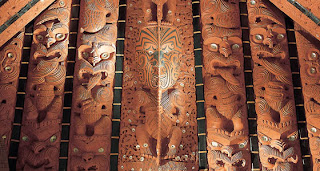 Is it important for writers to have a strong sense of nationalism and culture in their published work? As a writer this question has been in my mind for sometime now. Here are my thoughts on the subject:

The job of the creative writer.

Creative writing to me is a tool. Just like any art form from poetry, to painting, to film, to anything. It is a tool, which allows me to be creative. To express whatever I have going on in my brain. My argument is centered on this point.  That I believe creative writing should be about communicating, entertaining, sharing ideas and my point of view in the most artistic way. Therefore to have a strong sense of nationalism and culture should not be the main focus of being a writer.
There seems to be a rule in New Zealand Educational Institutions that as a New Zealand writer, we must write with a strong sense of nationalism or else it has no value. We must write to show the world what a New Zealander is. But if we want to write with our imaginations about a fictional world with no nationalistic agenda we are somehow doing the wrong thing. On top of that we must write in common form such as novel or poetry and if you want to tell a story in any other form such as comic book then that’s not the way of the “NZ writer”. These are only examples and are not always the case but this shows the hierarchy in the genres of creative writing which is being taught by closed minded academics in certain educational systems. When a teacher tries to tell their students what they must write about, that is when the teacher has lost focus on what their job is. It is to teach ways to write, not what to write. We are storyteller’s not cultural ambassadors out to right the wrongs of colonization. Although that is a good way to be, it’s not for me. This pressure or control from our mentors to follow their way of thinking alienates a whole new generation of writers and the ideas they wish to express. By doing this it also alienates a whole generation or would be readers who don’t connect with much New Zealand literature on offer at the moment.

The development of Nationalism in New Zealand and the circumstances upholding it.
New Zealand literature began during the 19th century by mainly British migrants and settlers. It was essentially a sub-type of English literature dealing with topics coinciding with English literature but also dealing with New Zealand themes or places. The subjects they covered in the early days of colonial New Zealand were structured around the needs of the British settlers to enforce their ideologies on the native Maori and Pakeha alike. Maori had stories and poetry but they were told orally or through art so what they had to say was disregarded because they had no written form of language.
Some of the literature first introduced in New Zealand was:
These were early examples of nationalistic writing for people of British descent. It wasn’t until the 1950s that New Zealand writers began writing creatively in a nationalistic way. “This flowering of creative and critical talent was not sudden, but the climax of a process that had begun at least two decades before.” (1)
It is clear to see that nationalism and identity formation in New Zealand was more of a political process created in times of racial conflict and oppression.
The 1930s heralded in a new age of New Zealand identity narratives, due to creative writing becoming an educational focus in universities as well as more opportunities to get work published in magazines and journals. Many of these writers were also tackling global, social and political issues expressing ideas of resistance that went against the established views of Pakeha who still looked to England as home. Following a reworking of university education in the post-war era, creative writing has progressively gained prominence in the university setting.
By the 1960s Maori creative writers came onto the scene and they brought fresh ideas and perspectives not yet seen; predominantly to write stories of Maori by Maori.  This was to counter the effects of colonialism and to give Maori a voice in the literary world. They wrote of identity relaying experiences of Maori with elements such as:
From this we can see how New Zealand identity has been developing over different periods which are due to changes in political conditions and paradigms of the nation.

Nationalism as a paradigm that promotes the nation above all else sacrificing the needs and desires of the individual.

Nationalism in creative writing is about identifying a culture or nation to promote that nation. This helps people of that nation make sense of their ethnic identity as well as for the wider world to have a better understanding or image of the nation. It’s about a common human need to belong to a group and relating or differentiating from others. “At its most basic, it gives you a sense of personal location, the stable core to your individuality. But it is also about your social relationships, your complex involvement with others” (Weeks, 1990, p.88).

Being of mixed ethnicity can raise many issues when writing with a strong sense of nationalism and culture. The stories they tell are no longer just theirs. They belong to the people of that ethnic mass as well. Being from an urban working class background with not much connection with the history or culture of the ethnicities we belong to raises even more questions of authenticity. How New Zealand are you? How Maori are you? How Polynesian are you? These become labels with a lot of ethnic baggage that we have to think about if we want to write with a strong sense of nationality. Whether we look at identity through a personal or collective framework we can see that our identity has been shaped by our historical grievances.

In the end there is a place for nationalistic literature and teaching but don’t put that on me as a creative writer and don't hate because I prefer to go against cultural dynamics of this time by doing something that hasn’t been done before.